I went into the local shop on Monday morning just before 8.30a.m. I wasn’t sure if the shop was open as the only other person I could see was the breadman carrying in trays of bread and stacking it on the shelves. I gathered up a few things for breakfast and made my way to the checkout.

I saw the shop owner at the instore ATM machine. He indicated to me which checkout I should go to and said he’d be there in a minute. He walked up the shop aisle carrying a cup of coffee.

He proceeded to check my few groceries through.

I half heard him say something to me.

A question I am often asked – Did you deny how ill you were to yourself?

“Because I wanted to live.” That is not to say other people don’t want to live: I’m sure they do. But I knew I needed to act.

I remember the consultant giving me the percentage of people surviving my type of cancer and I thought: I can do this. END_OF_DOCUMENT_TOKEN_TO_BE_REPLACED 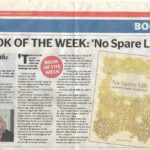 Many thanks to the Northside People (east) newspaper for featuring No Spare Life: one woman’s journey through cancer as their “Book Of The Week” in their May 24th edition.

If the scanned image here isn’t clear enough you can also read it online.

I would like to say a big thank you to the people who attended the reading in Ballymote Community Library on 23rd June. Thanks to Louise for sending out emails and encouraging people to come along.  A good round of questions at the end and good to talk to people afterwards too.

Saleen was woken from her thoughts by the sound of a woman placing her cup onto a saucer. It was the cup, pale pink, chinking off the saucer that reminded her of a child’s tea set. She had not thought about it for fifty years. It had been her sister Boo’s tea set. It was rose pink with a gold band round the top of the cups and had matching plates and saucers. Oh, she could just see it, so pretty, delicate bone china. Where did it come from? She couldn’t remember.

As children they had washed up after Sunday dinner at the white trough sink in the small kitchen. One week Boo would wash and Saleen would dry and the next week they would change about. The tea towel was drenched by the time they had finished. Boo had a very annoying habit of handing back anything that she thought had not been properly washed. As a teenager Saleen had washed the dishes with another sister, Em, who was not such a perfectionist. This was a far more enjoyable experience and done in half the time. Now for the first time in years Saleen was alone and had no dishwasher. She wasn’t going to get one either – too hard on water plus she finds she does her best thinking at the sink.

There’s a place she goes for coffee on a Sunday sometimes, a café out along the coast which only opens from March to October. She’d like to go there now but it’s November. One whole wall inside is a glass display case with dolls houses and miniature pieces of handmade furniture, tables, chairs and chandeliers like the dining room in Downton Abbey. There are tiny vases, clocks and beautifully crafted ceramic King Charles spaniels paying attention, warding off intruders. The café owner, a middle aged man, is friendly in his own way but could do with a few lessons from the school of deportment and charm, Saleen thought. He doesn’t look like the sort of person who would go to the bother of collecting pieces for it must have taken years to build up the collection. Perhaps it was his wife, whom Saleen had never seen or his daughter. Now that she thought about it, it was a memorial to someone. She had never seen him open the case or even stop to look at it.

Sprinkling holy water always moved her. It was something her father did when they were leaving the house. She thought about that scene in the film, Dancing at Lughnasa where the two sisters are leaving to go to England in the middle of the night. They stop at the door, dip their fingers into the holy water font and sprinkle it in the direction of each of the bedrooms, saying the name of each member of the family. That was the last time she had a good cry.

Why did they pick pink for cancer? She used to like pink.

Thank you to www.writing.ie for including my piece about what writing means to me, as well as details of my book, in the section, Writing & Me. As I was writing the piece, I was reminded of some watershed moments and people who encouraged me over the years; like my teacher in primary school, like the people who published my pieces in the local newspaper, like the Raving Beauties women’s theatre company who published my poem, Busy Dying, in their anthology Hallelujah for 50ft Women and who really encouraged me to continue writing with integrity. Like the people who, before I submit pieces, give my writing the once-over, editing or proofreading. Like the people in the various writers’ groups who give me feedback through constructive criticism. The reminiscing has been life enhancing and allows me to see how far I’ve come. Thank you.

I would like to say a big thank you to the people (some of whom I knew and some I met for the first time) who attended the book launch in Sligo on Saturday 25th March. It was a beautiful day weather wise so I really appreciate people coming along.

The Banking Hall in the Yeats Memorial Building was full of atmosphere as at the moment it is hosting the Yeats exhibition.  I read these pieces from my book, No Spare Life: In the Beginning, Marionette Days, Skin Cover and Grace Notes which was accompanied by Klaus Harder on the guitar and is a good piece to finish on.

You are cordially invited to the Sligo launch of Rosaleen Glennon’s book No Spare Life: one woman’s journey through cancer. 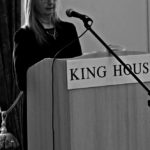 My book was launched in King House in Boyle in January. Thank you to my writing friends, neighbours and people who didn’t know me at all for coming along. It was a great day too and it was lovely that people came up for a chat afterwards. Making new friends.