I saw, crossing the green, a woman pulling a red tartan shopping trolley. She wore a navy headscarf knotted at her chin, a beige Burberry style trench coat belted tight against the wind and thick, comfortable shoes. She was not unlike my mother. But that couldn’t be her. I watched her.  She moved with some speed, though slightly stooped. She was taking the quieter route to the shops. Head pushed out, determined on her way. END_OF_DOCUMENT_TOKEN_TO_BE_REPLACED

Every day is the start of something beautiful and right now 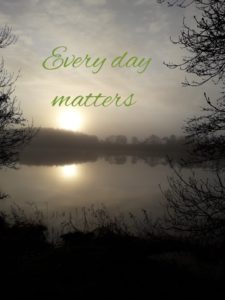 I look at the plants and shrubs fading, scraggy now at the end of August. I think how beautiful they were over the summer – their blooms, their leaves flourishing. The joy they brought to me.

My lovely neighbours are moving back to England. The removers will do it in two hours. I’m not there to see them off.

On Inis Oírr I saw a blue jellyfish called, “sailor on the wind.” It’s like a mussel with a fin.

I’m wrapping up, for the last time this year, my garden parasol. Picking up nasturtium pods, saving seeds for spring.

Are we just “sailors on the wind,” being carried where more mighty forces take us?

I used to listen to people going on about stuff but
time is precious and I don’t anymore.
I used to live in Germany
I used to remember the reg. no. of my car
I used to be more organized about paperwork
I used to get paid on Fridays – money in my hand
You rarely see actual notes nowadays.
I used to be in a folk band and sang Hard Times
I used to collect bits and pieces in an Old Curiosity Shop
biscuit tin. I still have it, full of treasure.
I opened it recently to place a square
of my mother’s granny print apron in it.
I used to live in the city
I used to listen to advice from friends
Now I listen to my own gut which is much happier.
My head is too.
I used to be a child. Some days I can still sulk.
I used to believe in The Waltons, The Little House on the Prairie,
Flipper and Tammy.
I used to look at the news, bought a newspaper everyday
but it’s all bad stuff.
The beautiful simple, seeing otters at the lake, isn’t news.
I used to chew Wrigleys gum
I used to know where I left stuff
Now I lose it all the time
Keys, pin numbers, beloved animals, my parents and friends
I’m still losing them.

I used to have two breasts, now I have one
I used to think the remaining breast
Should be in the middle of my chest
I felt unbalanced.
It took a year to accept this ‘new look.’
I knew I was going to be okay when one morning
I was about to shout
‘Has anyone seen my prosthesis?’
Wouldn’t that be shocking funny?
I rolled back onto the bed and laughed.

I used to be busy dying now I’m busy living.

Dead at the edge of the road, under the bridge, with it’s head turned into it’s chest, an owl. White frightened face.

Thump, another bird hits the window making myself and the dog jump. An upturned thrush on the ground two legs kicking the air. I put it in an old tea towel and place it in a box on the window sill it’s body in shock. Later, it spreads it’s wings, a great stretch. It hobbles, it’s foot is turned in. The other leg is caught in a hole on the floor of the box. I frighten him more by moving him. He huddles into the tea towel. A while later he has stopped breathing.

Within the hour there is another thump at the window. I repeat the pattern.

I have placed four dead birds on top of the ditch. Three thrushes and a blackbird.

My poem Busy Dying (which is a poem about living) has been translated into Icelandic and published in Tímarit, an Icelandic literary magazine. Thank you Ásdís Ingólfsdóttir for spotting it in another publication, Hallelujah for 50ft. Women edited by Raving Beauties and published by Bloodaxe. http://tmm.forlagid.is/upptekin-vid-ad-deyja/?fbclid=IwAR0D5lJ0Y4XFfWNOtmkS1WTHupapTb9bYcG2zdDWgyDm2hxUND7RlmrvUmg

for there will be many doors to open in the future

and sunlight will drift across the threshold

stop what you are doing and watch for a while.

It’s there again today – the Light

I am taken by the woodbine’s beautiful yellow and white flowers, in a mass of green leaves clinging to a wooden trellis. As I sniff it a life-giving fragrance travels through my body and my senses reveal themselves to me.

When I first came to this garden ten years ago the woodbine was flourishing on the south facing wall of the house. But in that very hard winter in 2010 it became brown and bare and died right back.

I tore at the woody stems which came away easily. I left a sprig at the base of the plant and it remained like that for quite a while. Then one spring, to my 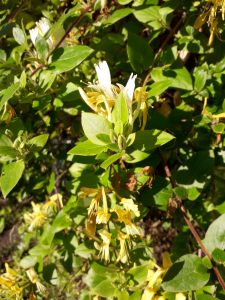 great joy, I saw the tiniest green shoot. After some time one shoot became two shoots and then a third one grew. It began to flourish and now three years later, helped by the very hot summer this year, it is fully in bloom.

We can get knocked back through illness, bereavement, job loss, something didn’t go the way we hoped it would. We are cut to the quick and are all but done in with worry when some tiny fragment of our spirit springs into life. Given light and nourishment we begin to thrive again just like the woodbine.

Stepping out of the ordinary everyday and making your own everyday extraordinary.

I was in Germany recently, where I used to live, and took out my old bike and cycled every day I was there. I’d forgotten what a joyful thing it was to do. I forgot my cares cycling about the countryside looking at the fields of END_OF_DOCUMENT_TOKEN_TO_BE_REPLACED