No Spare Life: one woman’s journey through cancer 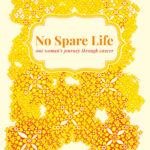 I’d been living in Germany for eight years when I was diagnosed with breast cancer in September 2010. On gleaning the news after a biopsy, I went into a spin. I don’t remember leaving the doctor’s office on the third floor of the hospital and getting into the lift. I began to think again when the lift doors opened and I stepped out on the ground floor. I turned round three times on the spot and thought. “What am I going to do now? Does he mean I should get my affairs in order?” I almost laughed at my own thinking. I realised that we have absolutely no control. We might think we have, but we don’t.

I had been writing for a number of years and so it was natural for me to write about the cancer as a way of making sense of what was happening, as a way of keeping a record of my life and as a way to honour it (the cancer). I realise everybody’s experience of cancer is different but I want to publish what I have written in the form of poetry, short pieces of prose and artwork to share what happened to me, so that it might help other people who have had such a diagnosis as well as their families and friends. I hope it helps.